54 Percent of U.S. Metros on Pace to Reach Eight-Year High in Home Sales in 2015 Based on Sales Through August

August All-Cash Share of Home Sales Bounces Back From Seven-Year Low in July;
FHA Buyers Account for 23 Percent of August Home Sales, Up From 18 Percent a Year Ago 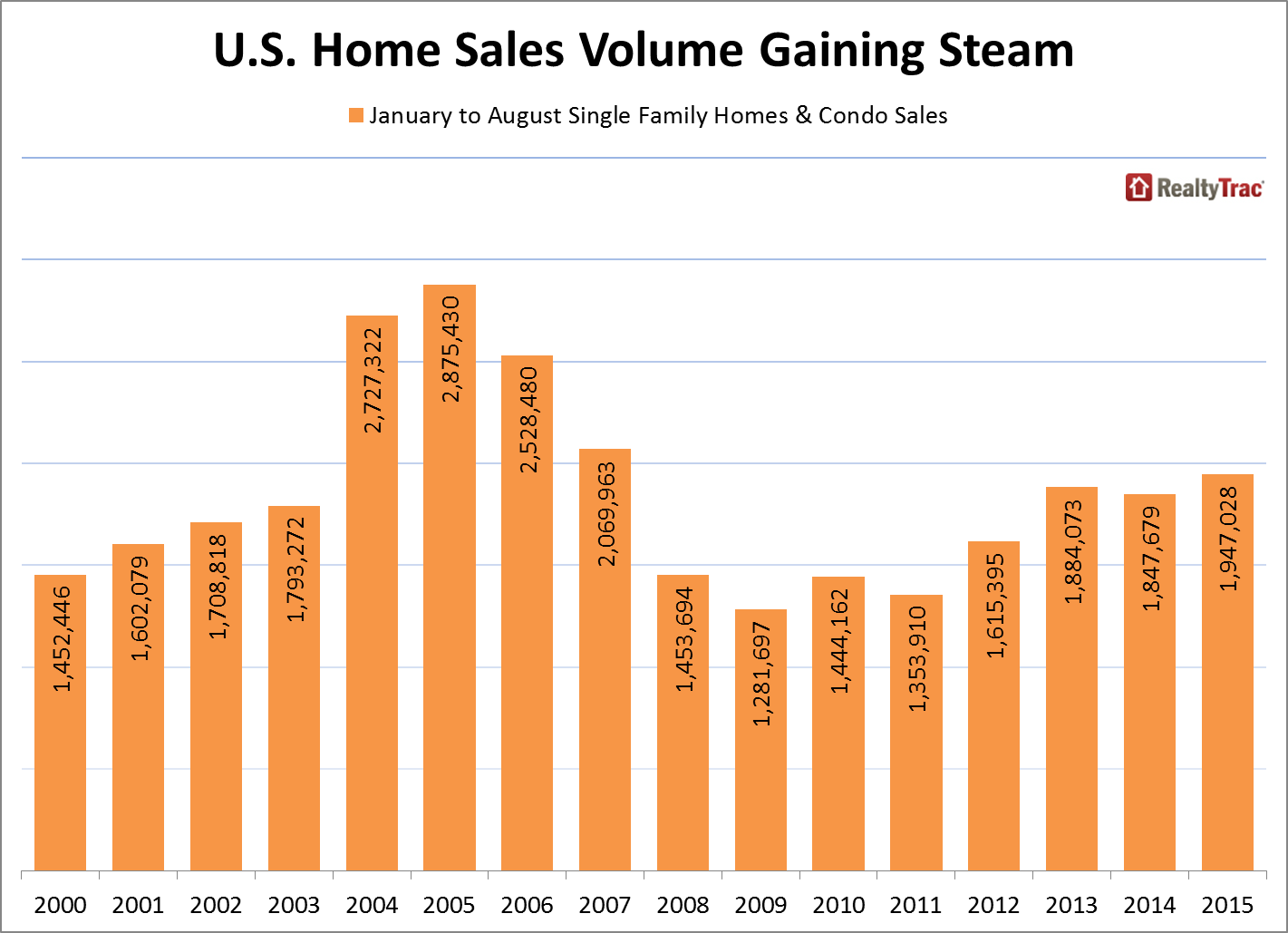 A total of 1,947,028 U.S. single family homes and condos sold through August in 2015, up 5.4 percent from the same time period a year ago to the highest total for the first eight months of the year since 2007, when there were 2,069,963 sales. The 110 metro areas on pace for at least an eight-year high in home through August included Los Angeles, Phoenix, Dallas, Denver, Riverside-San Bernardino in Southern California, Detroit, Seattle, Tampa, Minneapolis and Portland. 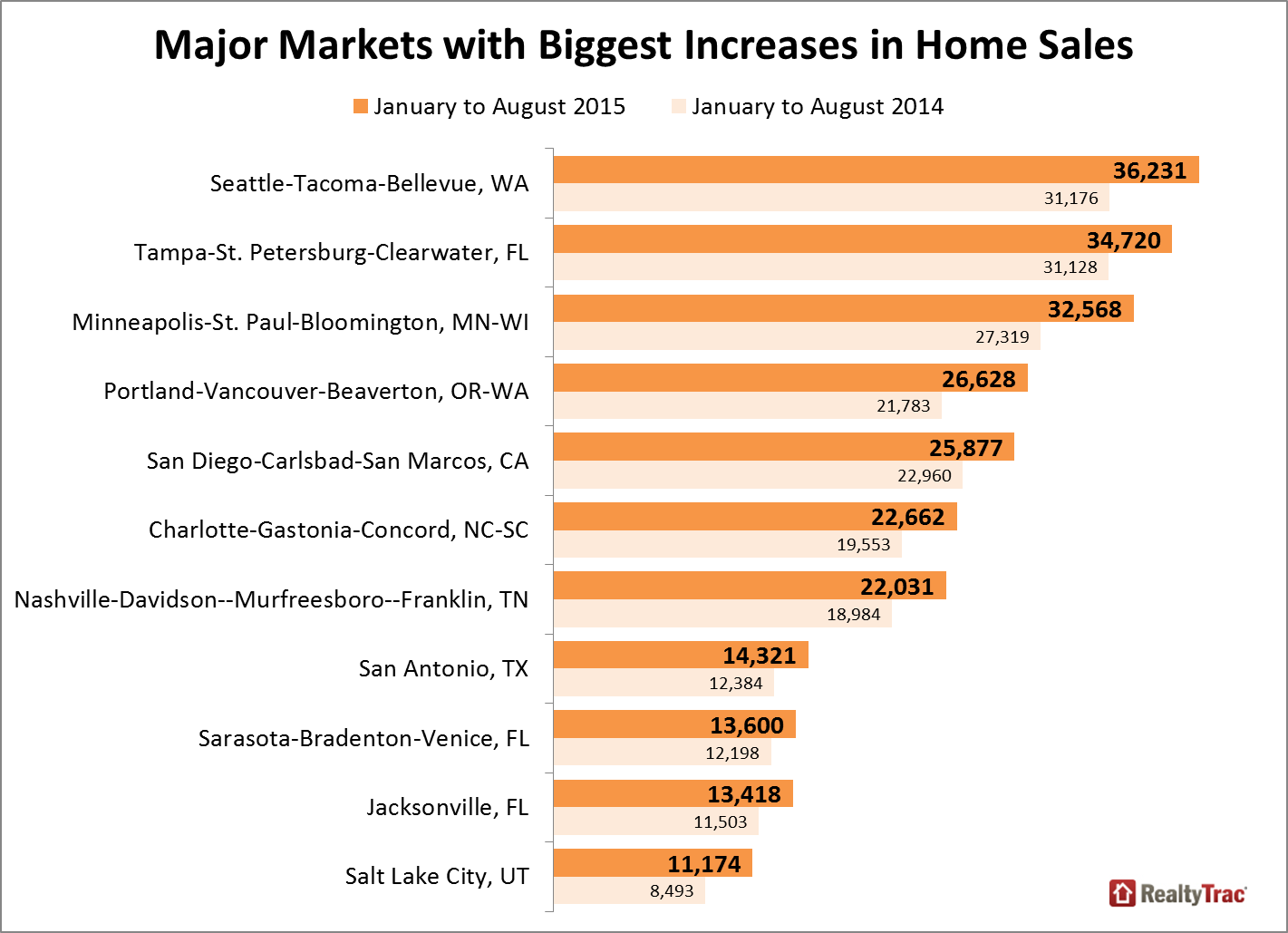 instability has fueled more demand for U.S. real estate,” said Daren Blomquist, vice president of RealtyTrac. “The share of cash sales nationwide in August bounced back from a seven-year low in July, and the month-over-month increase in cash sales share was more pronounced in markets that have traditionally been magnets for foreign cash buyers, including Boston, Las Vegas, San Francisco, Seattle and New York.”

“Our market continues to solidify, even with the steady growth in volume and price we appear to be on more solid footing.  Distress sales continue to decline, a global wind from foreign investment, and uptick in cash and FHA numbers all point to a healthy market,” said Mark Hughes, chief operating officer with First Team Real Estate, covering the Southern California market.  “We expect an end of year settling but the further we get from 2008 the stronger the sentiment is for normal market movements.”

“Sales have been very brisk in the Reno-Sparks market,” said Craig King, COO at Chase International brokerage, covering the Lake Tahoe and Reno, Nevada markets. “Seasonally the market may follow a traditional fourth quarter slowdown, but overall we expect sales to remain very strong with this influx of new people from outside the marketplace and more new first time buyers coming into the area to fill initial jobs with businesses like Tesla and Switch expanding into the local area.” 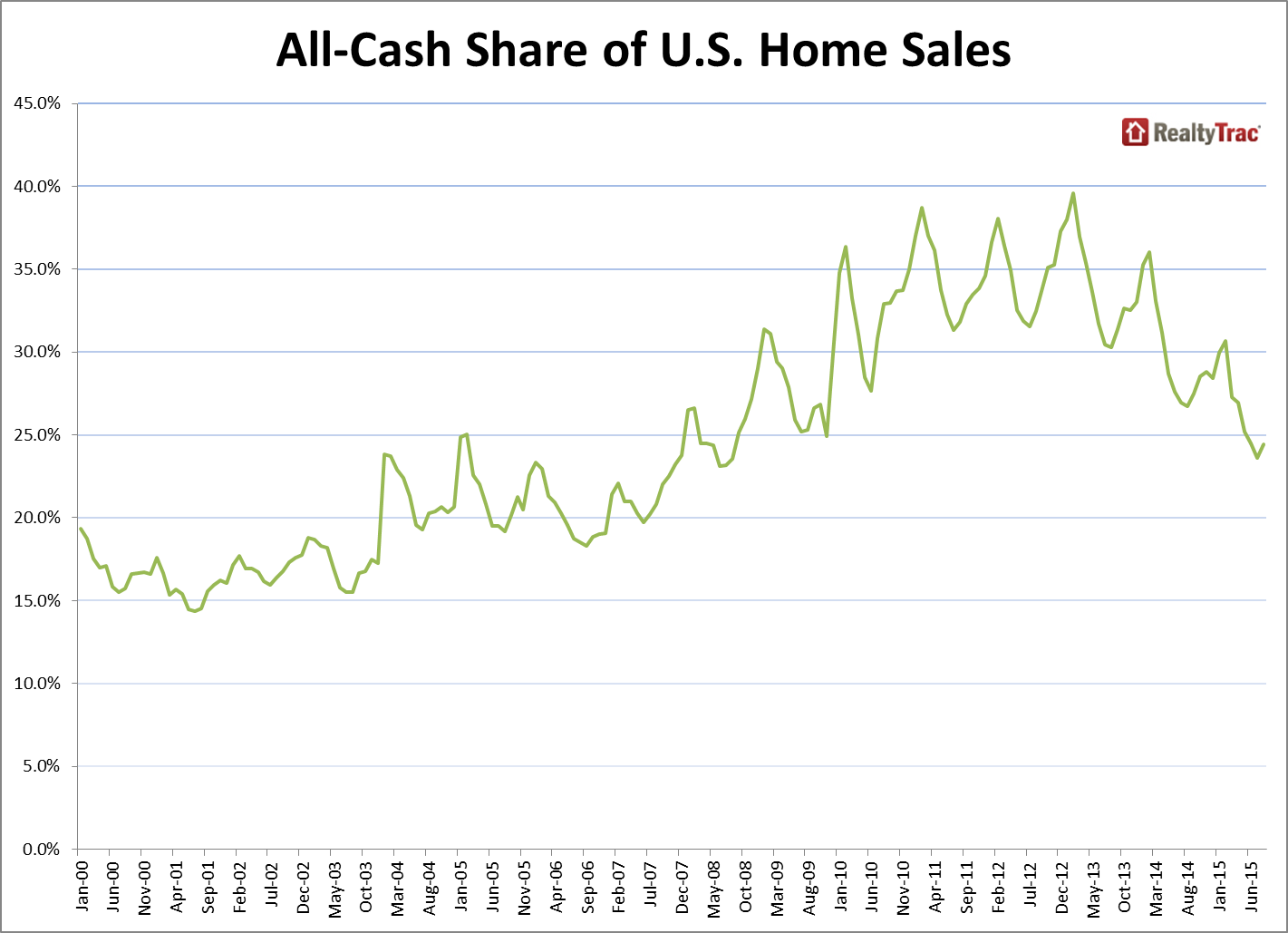 Among metropolitan statistical areas with a population of at least 1 million, those with the highest share of cash sales were Miami (48.7 percent), New York (44.7 percent), Las Vegas (42.2 percent), Raleigh, North Carolina (39.6 percent), and Tampa (37.6 percent).

“The South Florida market is more balanced and healthier today than in the past decade. With an abundance of financing options we are seeing strength in the first-time home buying market,” said Mike Pappas, CEO and president of the Keyes Company covering the South Florida market. “The spike in home values has strengthened the move-up market and our international buyers and investors weigh in heavily as cash buyers.”

“Cash buyers are patiently waiting on the sidelines as inventory increases slightly and brings more selection to the market,” said Al Detmer, broker associate at RE/MAX Alliance, covering the Greeley market in Colorado, where cash sales accounted for 17.4 percent of all home sales in August, down from 24.4 percent a year ago. “FHA loan limits hinder buyers over $272,000, while sellers at or below FHA loan limits select buyers that have more skin in the game with larger down payments.”

The share of buyers using Federal Housing Administration (FHA) loans — typically loan down payment loans with an average down payment of about 3 percent — continued to increase in August, when 23.1 percent of all single family and condo sales were to FHA borrowers, up from 23.0 percent in July and up from 17.8 percent in August 2014.

“It wasn’t just cash buyers that kept home sales volume strong in August,” Blomquist noted. “The share of buyers using FHA loans in August increased 30 percent from a year ago, and the year-over-year increase in the share of FHA buyers was 50 percent or more in markets such as Nashville, Phoenix, Colorado Springs, Portland and San Diego. Those markets with a solid and fast-growing share of FHA buyers are poised for longer, more sustainable growth going forward than markets that are more dependent on capricious cash buyers.”

Among metropolitan statistical areas with a population of at least 1 million, those with the highest share of FHA buyers were Las Vegas (39.0 percent), Riverside-San Bernardino in Southern California (36.5 percent), Baltimore (32.0 percent), Phoenix (31.8 percent), and Atlanta (30.9 percent).

“With available inventory levels continuing to improve choices for consumers across Ohio, we are experiencing a noticeable increase of buyers taking advantage of low down payment loan products such as FHA, VA, and USDA type loans,” said Michael Mahon, president at HER Realtors, covering the Cincinnati, Dayton and Columbus markets in Ohio, where FHA buyers accounted for 26.6 percent of home purchases in August, up from 21.3 percent a year ago. “Low interest rates continue to fuel housing affordability for consumers and increased sales volume of homes sold during the month of August.” 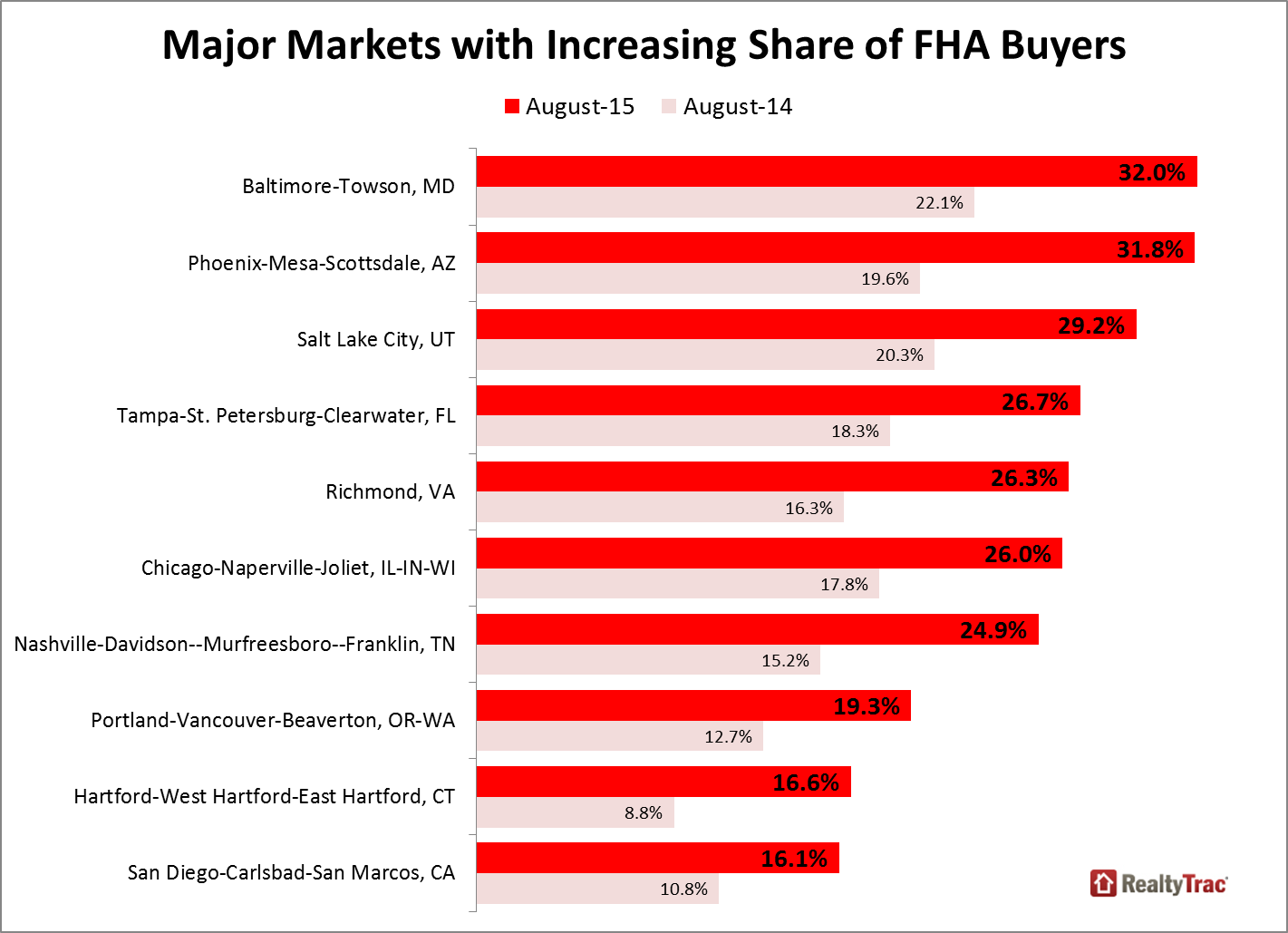 Distressed sales, including sales of homes in the foreclosure process and sales of bank-owned homes, accounted for 8.9 percent of all single family home and condos in August, down from 9.3 percent in July and down from 12.2 percent a year ago to the lowest level going back as far as RealtyTrac has distressed sales data, January 2000.

Major markets with the biggest year-over-year increase in share of distressed sales were Boston (up 75 percent), Milwaukee (up 27 percent), Rochester, New York (up 22 percent), New Orleans (up 16 percent), and Hartford, Connecticut (up 13 percent).

Sales of homes to institutional investors — entities that purchase at least 10 properties during a calendar year — accounted for 1.0 percent of all single family home and condo sales in August, up from just 0.3 percent in July but down from 3.2 percent in August 2014.

Among markets with a population of at least 1 million, those with the highest share of institutional investor purchases were Tampa (4.7 percent), Jacksonville, Florida (4.1 percent), Charlotte (3.3 percent), Buffalo, New York (2.8 percent), and Orlando (2.7 percent).

Report methodology
The RealtyTrac U.S. Home Sales Report provides percentages of distressed sales and all sales that are sold to cash buyers by state and metropolitan statistical area. Data is also available at the county and zip code level upon request. The data is derived from recorded sales deeds, foreclosure filings and loan data. Statistics for previous months are revised when each new report is issued as more deed data becomes available.

FHA buyer purchase: sales where the purchase loan associated with the sale is backed by the U.S. Federal Housing Administration.

Distressed Sale: a sale of a property that occurs while the property is actively in some stage of foreclosure (NOD, LIS, NTS, NFS or REO). This includes only sales to third-party buyers or investors not involved in the foreclosure process. It does not include property transfers from the owner in default to the foreclosing bank or lender.