IRVINE, Calif. – Nov. 5, 2015 — RealtyTrac® (www.realtytrac.com), the nation’s leading source for comprehensive housing data, today released its September and Q3 2015 U.S. Home Sales Report, which shows that homeowners who sold during the third quarter realized an average price gain of $40,658 (17 percent) from the purchase price of their property, the highest average price gain for home sellers since the third quarter of 2007. The report also shows home sellers in the third quarter on average had owned their home for 6.72 years when they sold. 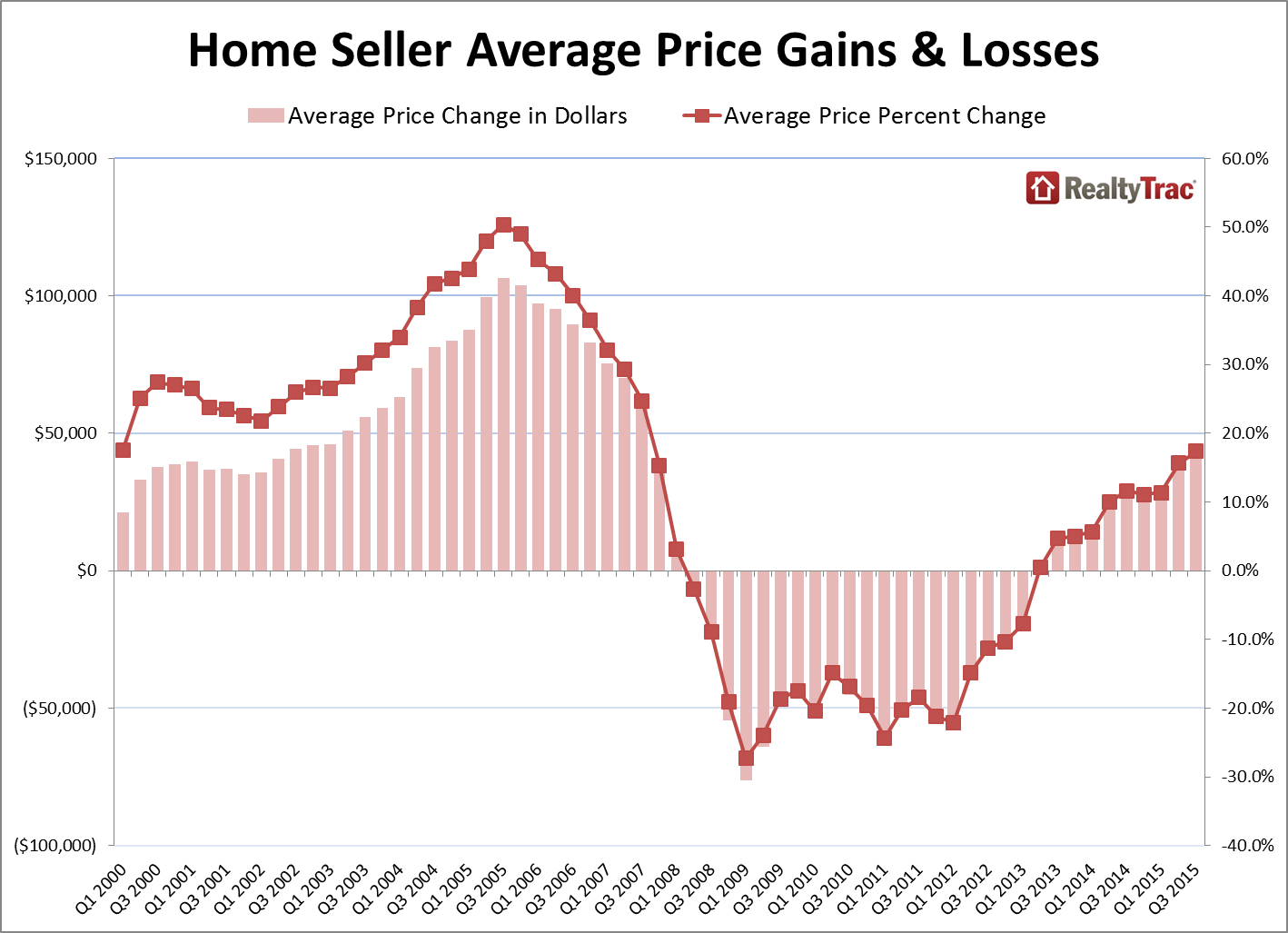 The eight-year high in average price gains for home sellers in the third quarter came despite slowing home price appreciation. The average sale price of single family homes and condos nationwide during the quarter was $263,976, up 0.2 percent from the previous quarter and up 2.4 percent from the third quarter of 2014 — the slowest year-over-year price appreciation in any quarter since home prices bottomed out in the first quarter of 2012.

The report also shows 2,487,664 existing single family and condo sales through the first three quarters of 2015, the highest level for the first nine months of a year since 2006 — a nine-year high.

“An increasing number of homeowners in 2015 have been cashing out the home equity they’ve gained during the housing recovery of the past three years,” said Daren Blomquist, vice president at RealtyTrac. “That may be a good decision because the data points to a plateauing market going forward. Home price appreciation is slowing, a trend that will continue if interest rates rise in the coming months as expected. Meanwhile the threat of rising interest rates combined with lowered premiums for buyers using FHA loans is spurring more demand.”

“Home sales in the third quarter saw an increase in first-time home buyers in the area. With FHA loans accounting for nearly a third of the overall purchase transactions across the state, low interest rates, and the tax benefits of homeownership continue to be driving factors for home buyers to elect to purchase, versus renting,” said Michael Mahon, president at HER Realtors, covering the Cincinnati, Dayton and Columbus markets in Ohio. “Seeing greater homeownership in communities, as compared to vacancies a few years ago, is providing notable increases in equity for all homeowners to enjoy.”

RealtyTrac analyzed 171 counties with at least 500 sales in the third quarter and where home price data was available both on the most recent purchase and the previous purchase. In 20 of those counties (12 percent) home sellers on average in the third quarter sold for a lower price than what they purchased for.

“The millennials and first-time homebuyers are kicking in and taking advantage of low interest rates and loosening financing options,” said Mike Pappas, CEO and president of the Keyes Company, covering the South Florida market where average home seller price gains in the third quarter ranged from 11.7 percent in Palm Beach County to 14.9 percent in Miami-Dade County. “Our market has returned to a balanced normal market with real sellers and real buyers.”

“Our market continues to be strong, in fact we saw increased year-over-year sales numbers for our offices, but we have begun to see the annual slowdown in the market that happens after August that is giving buyers an opportunity to purchase under less stressful circumstances of multiple offers and quick deadlines,” said Greg Smith, owner/broker at RE/MAX Alliance, covering the Denver market in Colorado. Denver County had the sixth highest average home seller percentage price gain in the third quarter at 41.5 percent. “We have seen a strong influx of parents buying ‘kiddie condos’ for their children to live in while attending college.  Parents seem to be choosing this path as both an investment, but also to ensure their child lives in a well-kept property that meets their expectations.”

In the third quarter, there were 15,956 sales of single family homes and condos to institutional investors, 1.9 percent of all sales. That was up from 1.6 percent in the previous quarter but down from 5.0 percent a year ago.

There were 72,218 single family homes and condos sold in the third quarter while actively in the foreclosure process, 8.1 percent of all sales. That was down from 8.2 percent in the previous quarter and down from 9.2 percent a year ago to the lowest level going back as far as RealtyTrac has national data, January 2000.

In the third quarter, 72,245 bank-owned (REO) single family homes and condos sold, also 8.1 percent of all sales. That was down from 9.2 percent in the previous quarter and down from 10.8 percent a year ago to the lowest level since the third quarter of 2007 when it was at 8.0 percent. The recent peak in REO sales was 34.3 percent of all sales in the first quarter of 2009 (highest going back as far as RealtyTrac has national data, January 2000).

“The decline in distressed sales is a double-edged sword,” said Matthew Gardner, chief economist at Windermere Real Estate, covering the Seattle market. “On one hand, it’s a positive indication that the market is returning to normal; however, we are in dire need of inventory, and distressed listings were helping with the supply issues that are pervasive in the Seattle market.”

Report methodology
The RealtyTrac U.S. Home Sales Report provides percentages of distressed sales and all sales that are sold to investors, institutional investors and cash buyers, a state and metropolitan statistical area. Data is also available at the county and zip code level upon request. The data is derived from recorded sales deeds, foreclosure filings and loan data. Statistics for previous quarters are revised when each new report is issued as more deed data becomes available for those previous months.

REO sale: a sale of a property that occurs while the property is actively bank owned (REO).

In-foreclosure sale: a sale of a property that occurs while the property is actively in default (NOD, LIS) or scheduled for foreclosure auction (NTS, NFS).