IRVINE, Calif. – August 27, 2015 — RealtyTrac® (www.realtytrac.com), the nation’s leading source for comprehensive housing data, today released its July 2015 U.S. Home Sales Report, which shows sales of properties in-foreclosure and cash sales were down from a year ago to multi-year lows while year-to-date U.S. home sales in 2015 are at an eight-year high, and the U.S. median home price in July was at an 82-month high. 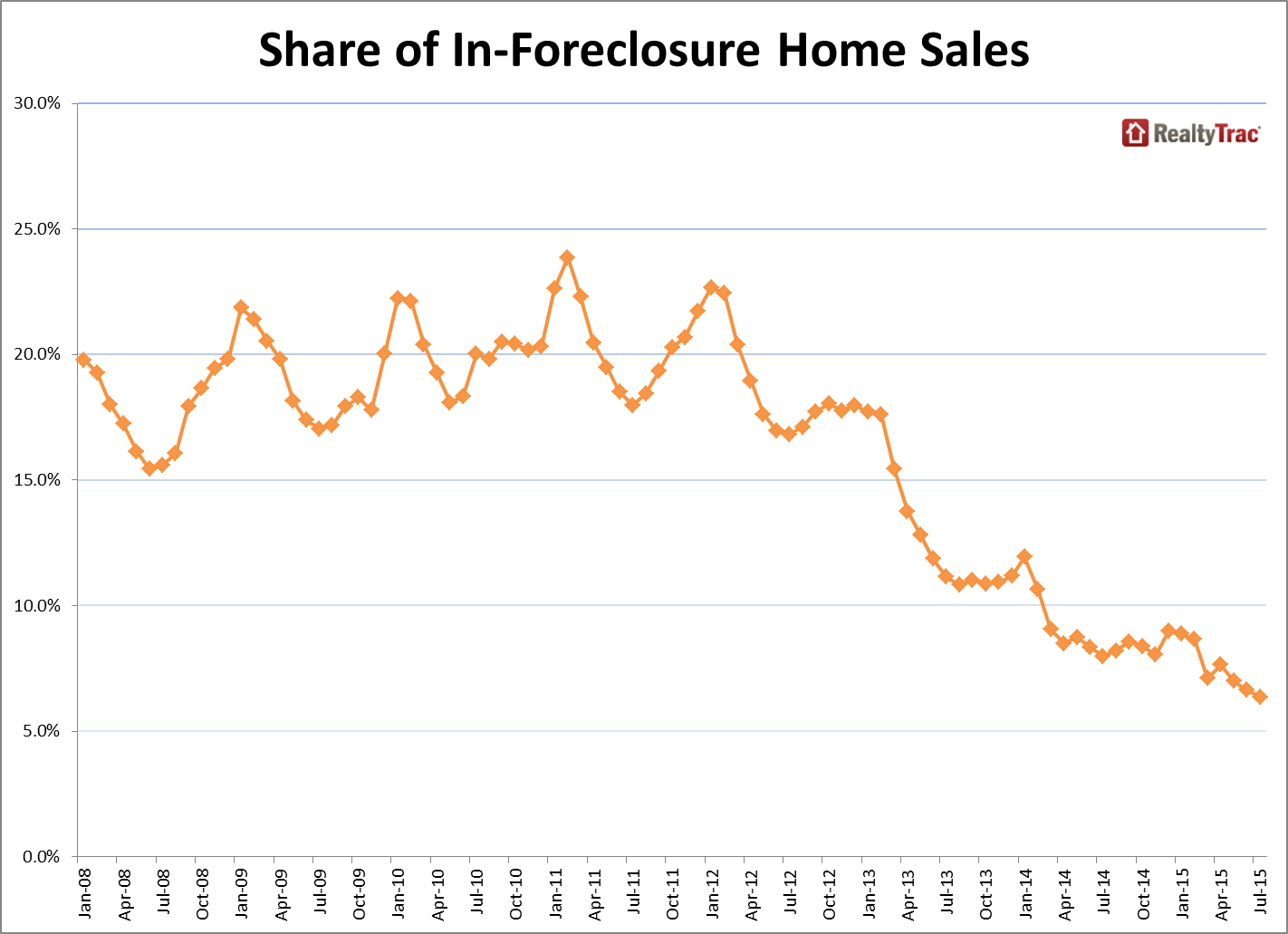 The sale of properties sold while in the foreclosure process (not including bank-owned properties) accounted for 6.4 percent of all single family and condo sales in July, down from 6.6 percent of all sales in June and down from 8.0 percent in July 2014 to the lowest monthly share since January 2000 — the earliest that data is available. 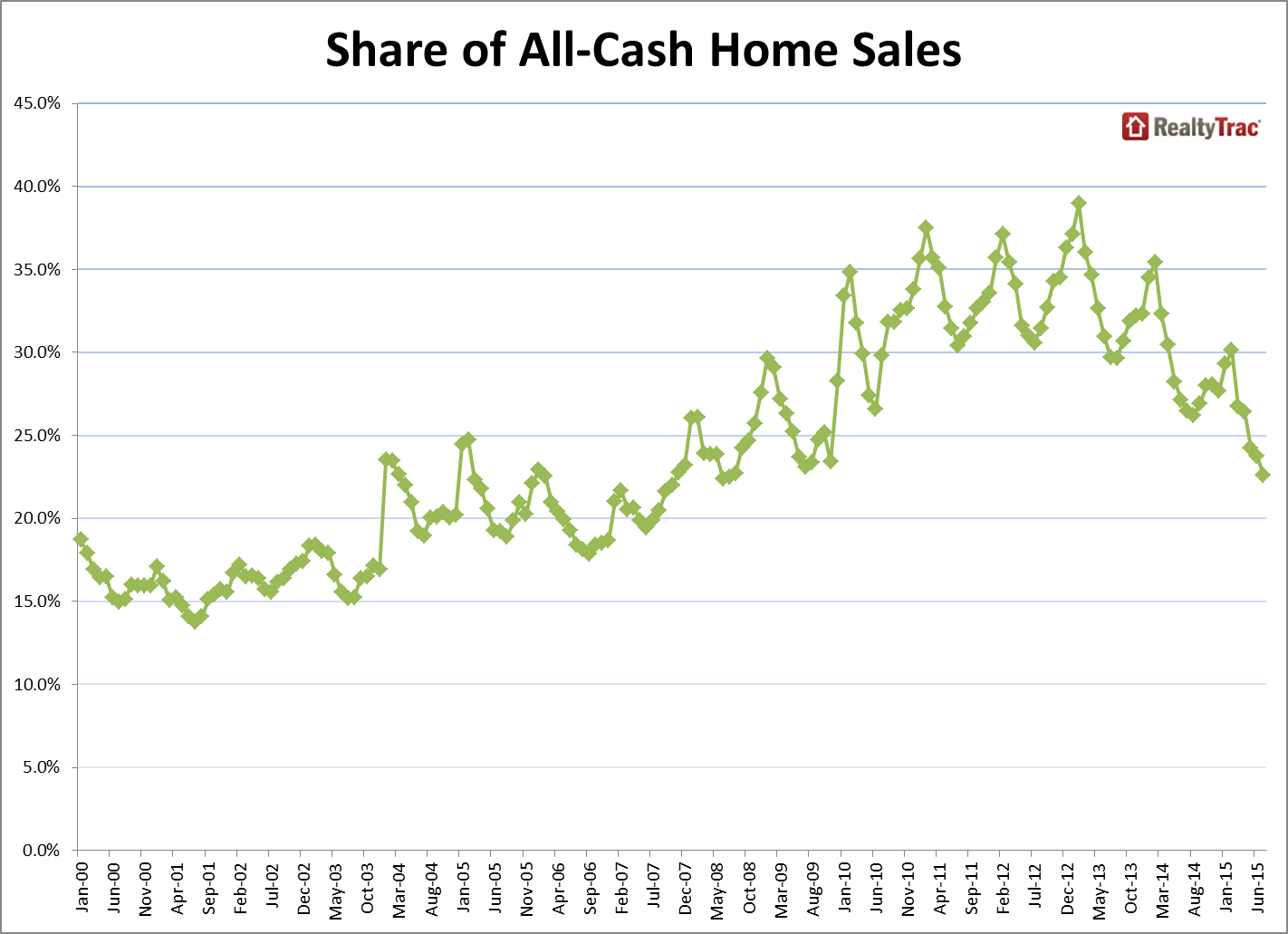 A total of 1,344,129 single family homes and condos sold in the first six months of 2015, according to public record sales deeds collected by RealtyTrac, the highest number of sales in the first half of any year since 2007.

“While the stock market may be on a roller coaster as of late, the housing market is still on solid ground, with the eight-year low in cash sales combined with the eight-year high in overall sales volume in the first half of the year evidence that housing is successfully transitioning from an investor-driven recovery to one that is drawing in traditional buyers as a good foundation for sustainable growth going forward,” said Daren Blomquist, vice president at RealtyTrac. “That’s not to say there are no cracks in the foundation of this recovery, the top three of which are housing affordability — or lack thereof in some high-flying markets — along with overdependence on capricious cash buyers — both foreign and domestic — in some markets, and the persistent overhang of underwater homeowners who continue to represent heightened default risk given any future economic shockwaves.”

“We are beginning to sense increasing inventory. Homeowners may be thinking that now is the right time to sell. There are some very real issues regarding the oil and gas industry, the threat of the Federal Reserve raising rates, a nationally less than robust economy, and negative vibes from foreign economies,” said Gene Vaughn, owner/broker at RE/MAX Alliance, covering the Northern Colorado market.  “Construction of new homes is in a higher gear to better meet demand and we may very well see a modest cooling in the fourth quarter of this year.”

“During the heat of the summer in July, the Ohio housing markets displayed further signs of balance and recovery. With listing inventories on the rise, month-over-month, in the Ohio metros of Columbus, Dayton, and Cincinnati; consumers are experiencing greater choices and renewed demand,” said Michael Mahon, president at HER Realtors, covering the Cincinnati, Dayton and Columbus markets in Ohio. “While overall sales unit volume dropped slightly in July, month over month, throughout many Ohio metros; the reflection of increased average sales prices lifted closed sales dollars volume throughout much of Ohio.”

“All indicators continue to point to a normalizing market.  A downtick in all cash and distress sales coupled with 100 percent of sales at estimated value and increasing median prices bodes well for continued strength through the fall,” said Mark Hughes, chief operating officer with First Team Real Estate, covering the Southern California market.  “We have seen growth in inventory which should tamp down this run of price growth; we need consistency to support the gains and to help maintain confidence moving forward.”

“With market inventory remaining extremely tight, the fact that sellers are holding out for full price offers is clearly not a surprise. In fact, there are several sub-markets where sales prices exceed list prices,” said Matthew Gardner, chief economist at Windermere Real Estate, covering the Seattle market. “I still expect to see healthy growth in sales prices across the board through the balance of the year.  Inventory constraints persist which, in concert with persistently low interest rates and above average job growth, is acting as a catalyst for buyers to continue to feel comfortable with the market and the high price levels which are being sought.”

“South Florida continues to see the market improve on all fronts — non-distressed sales are up 10 percent in median sales price over last year,” said Mike Pappas, CEO and president of the Keyes Company covering the South Florida market. “We continue to see a decline in inventory in homes under $300,000 but above that price point we are beginning to see inventory rise. We have finally moved into a real market with real buyers and real sellers.”

In 57 of the 200 markets analyzed for cash sales (29 percent), the share of cash sales increased from a year ago, counter to the national trend. Those markets included New York, Los Angeles, Philadelphia, Baltimore, Denver and San Jose.

Report methodology
The RealtyTrac U.S. Home Sales Report provides percentages of distressed sales and all sales that are sold to cash buyers by state and metropolitan statistical area. Data is also available at the county and zip code level upon request. The data is derived from recorded sales deeds, foreclosure filings and loan data. Statistics for previous months are revised when each new report is issued as more deed data becomes available.

Properties in-foreclosure: a sale of a property that occurs while the property is actively in some stage of foreclosure (NOD, LIS, NTS or NFS). This includes only sales to third-party buyers or investors not involved in the foreclosure process. It does not include property transfers from the owner in default to the foreclosing bank or lender.